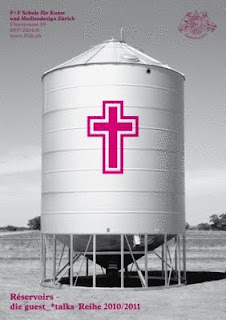 Wednesday, 12 January 2011, 7 pm
Peter Friedl, artist, Berlin: Das unmőgliche Museum [the impossible museum]
:
Museums suffer from a lack of money and space, but seldom from feelings of guilt. They live from their transgressions, from excluding and marginalizing. Since the Museum is a privileged place, every option for the museum is an affirmation of privilege. It has a firm place in a post-democratic system.
:
Peter Friedl, artist, Berlin. In 1997 and 2007 he took part in the documenta ('Museum of the 100 Days'). The Sternberg Press has recently published his book Die heimliche Moderne. Ausgewählte Texte und Interviews 1981–2009. On January 11, 2011, his new exhibition will open at the Galerie Nicolas Krupp in Basel. www.nicolaskrupp.com
:
:
Réservoirs – the guest_*talks series 2010/2011
:
The guest_*talks series Réservoirs at the F+F School of Art and Media Design in Zurich offers short cuts to money, value and art and presents models for discussion that go beyond the production of classical values.
:
Without belief and trust neither financial management nor art would exist. Credit comes from credo and means 'I believe'. A financial system subject to a crisis of confidence is doomed to collapse. The classical artist-who since the Renaissance has, next to God, assumed the role of creator-does not live from his profession but, as always, from his higher calling. The Medici, a dynasty of bankers and patrons of the arts, had already set the example of a link between money, value and art and, by financing art, used the reverence for Christ as a lever for breaking the power of the Vatican. Political and symbolic power is as ever reinforced by capital reserves, which must first of all be generated. The European colonial empires since the 15th century as well as the world powers after World War II had assured an access, above all, to cheap labor and raw material. Taking such reservoirs into account is what, even today, enables the accumulation of added value.
:
Full informations: www.ffzh.ch/download/report/973_2_guest_talks_2010_11_medienmitteilung_english.pdf
:
Upcoming guest_*talks
:
Wednesday, 16 February - Piroschka Dossi, publicist and curator in Munich: Aura als Kapital [aura as capital].
Wednesday, 02 March - Mascha Madőrin, Münchenstein, economist: Unsichtbares sichtbar machen [making the invisible visible].
Wednesday, 23 March - Olivia Plender, artist, Berlin: There is no alternative? - Questioning the production of value systems through artistic practise.
Wednesday, 13 April - Hannes Hug, Zurich, media representative, author and co-owner of an agency for personalities in public life: Change.
Wednesday, 04 May - Anna Bürkli, Solothurn, art historian & curator; Emanuel Tschumi, Zurich, graphic designer; Pius Tschumi, Zurich, scenographer: Cooking as a Praxis of Contemporary Art.
:
Over
Wednesday, 15 December - RELAX (chiarenza & hauser & co), artist's group Zurich: Reservoir News.
:
Place
F+F School of Art and Media Design Zurich, Flurstrasse 89, CH-8047 Zurich (www.ffzh.ch)
The events are open to the public and entrance is gratis. Apart from the lecture on 23 March 2011 with Olivia Plender all talks are being held in German.
:
Time
The bar opens at 6.30 pm. Lectures begin at 7 pm.
Events last 1½ hours.
Pubblicato da Raffaela Maria Sateriale a 04:50